The prefecture of Gunma is in the geographic center of the country. Takasaki is around 50 minutes from Tokyo by shinkansen (bullet train). The cities of Takasaki and Maebashi are convenient transport hubs and ideal bases for exploring all of Gunma, from its hot-spring heavens such as Kusatsu, Shima, Ikaho and Minakami to its stand-out snow resorts and beautiful nature in Oze.

Gunma at a Glance

Gunma Prefecture is located in the Kanto region of Japan, close to Tokyo, and has a population of approximately 1.9 million. Gunma is known across Japan for its onsen (hot springs). There are around 453 onsen in Gunma Prefecture and 100 onsen resorts offering overnight accommodation. Kusatsu Onsen has been voted the best onsen resort in Japan for 19 consecutive years and is known as the "Onsen Kingdom." There are three national parks in Gunma Prefecture, which are rich in nature and seasonal beauty. Oze National Park, Nikko National Park, and Joshin'etsu Kogen National Park are popular for hiking, and sports such as skiing.

Gunma has a rich heritage of craft. The city of Takasaki is famous for handmade Daruma dolls, a symbol of good luck and the achievement of future goals. Gunma has a long tradition of making wooden Kokeshi dolls and is known for its "creative Kokeshi dolls", which are modern interpretations, made with more artistic freedom. Gunma has also played an important role in Japan's textile industry. Kiryu City has a 1300 year history of silk weaving and sericulture that continues to this day. Tomioka Silk Mill was established in Tomioka City in 1872, playing an important role in Japan's industrial revolution and in the modernization of the silk industry. Tomioka Silk Mill was recognized as a UNESCO World Heritage Site in 2014. 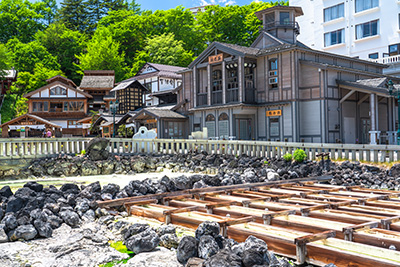